are French people ever excited?

When I'm teaching French, sometimes a child will ask me for a word or a phrase that they haven't learned yet and my automatic response is 'just use the words you know'.  On occasion, this is because I can't think of the word, or have never learned it (my daughter had to teach me the French for mobile phone!) but often I do know and yet for some reason my automatic reaction is to be unwilling to tell them. Why? I tell them new words all the time, why should I be stopping myself from telling them one more. I did wonder if it was pure laziness on my part: if I start by answering this question, will I then be bombarded with vocabulary requests that I can't answer?

I don't think it is that. I think it has to do with learning how to use language, something that  becomes evident when you try to speak a foreign language (and perhaps in those brain conditions where one begins to lose words). In our native language, we don't use words we don't know. We pick up new words by reading them or hearing them, not by going up to someone and saying 'what's the word for an orangey brown animal with a long neck that lives on the plains of Africa?' The word and the concept that goes with it arrive together. Even using a thesaurus, the word you choose ought to be a word you already know, or how can you be sure the context is right?

So the difficulty with a foreign language is that there are concepts in your brain for which you have no words. The children's answer to this is 'provide me with the words', but in the real world, part of speaking a foreign language is gaining the ability to work around lack of vocabulary, learning how to make yourself understood using those words you do have. I remember in France once I took a phone call from a boiler supplier. He really needed to be talking to the builder working next door and as I attempted to rustle up the words to tell him so, I could hear the little-used synapses in my brain firing up. I managed to produce 'chef de construction' (building boss?) which did the trick, but certainly wasn't what a French person would have said!

Then there's the question of words and phrases that exist in one language but not in another. Take the word 'excited'. Children in my class are always wanting to tell me they are excited about things. French children too must get excited, but perhaps they just don't talk about it, because there is no obvious word or phrase that captures the essence of anticipation and enthusiasm. It's hard enough to explain to the concept of gender to British children, this idea of words not necessarily being translateable is an even bigger one to swallow.

I suppose what I'm getting at is that part of what they need to learn is to switch off their English-speaking brain and start using their French. I know this is very hard when you only know a very little, but I suspect that it's the best way to turn a bunch of random words and phrases into a vocabulary.
Posted by never enough bookshelves at 09:28 5 comments:

The soothingness of words

The other day I came into the kitchen at breakfast-time to find Livia, aged 7, reading the comment page in the newspaper. Though I know she's a good reader I did find this a bit surprising as she's only just graduated from  Rainbow Fairies (boo! hiss!). Just to see if she was really reading it, I said something too her. Her finger went out to mark her place on the page as she raised her head to speak to me. Yes, she was definitely reading the words. Did she have any idea what she was reading? By the time she got up from the table I was involved in something else and so I didn't ask. Only later when I ran my eyes over the same page, left open on the table, while I ate my lunch did I stop to wonder what she had got from reading something that almost certainly meant very little to her.

In a book I am reading at the moment (The City of Dreaming Books by Walter Moers), someone says 'Reading is an intelligent way of not having to think.' I agree with this, but only partly. Ideally, a person reads and thinks at the same time; he is engaged with the reading matter. However to be truly engaged involves pushing all one's other thoughts to the background of the mind. That's what makes reading is such a useful way of passing travelling time and why it's such a good thing to do before sleeping (except for those occasions when the book is so gripping you can't stop thinking about it after you turn the light out). I can't see why anyone who can read would ever need to meditate. It's easy to empty your mind if you can fill it with someone else's words. 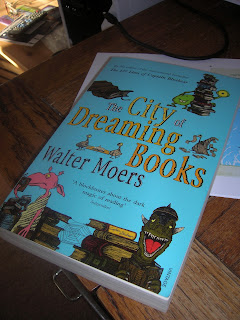 As for Livia's breakfast-time reading matter, I think this is the other side of the same idea. A reading person with an empty mind (as it often is at breakfast time) may find that their eyes simply latch onto words that they see. I don't suppose for one moment that Livia picked up the newspaper and selected the comment page to read. It was just there and eyes rested on it and then she did what she always does with words, she followed them across the page. I do it all the time: words leap out at me, notices, labels, road signs, poems on the Underground (what a great idea). I can still quote the message printed on the sanitary bags on the back of the school loo doors. On holiday in Crete this summer, I found the Greek alphabet desperately frustrating because it took such an effort to remember which shape had which sound and so to decipher the words. Of course I didn't need to do this. It was quite clear what all the words meant, as everything was written in English too, and German and something Scandinavian. But the words were there and were calling out to be read, and the fact that they weren't giving me their message felt like they were bombarding me with their crypticness.
Posted by never enough bookshelves at 10:23 3 comments:

Find me here too